We're on our way to Delphi!  We left the Mission Office about 7:15 am and went to Acropoli Branch where we met all the others.  We left there about 8:30 am and it was already very hot!  The journey went well until we took a wrong turn (courtesy of our wonderful GPS).  That added an extra half hour on to our journey, but sent us through the quaintest little town that was definitely not suited to vehicular traffic at all. The road was so narrow and everything was so close you felt like you were invading their privacy.  We arrived at the Delphi site about 11:15 and all the young ones and a couple of the oldies went tearing off to see the ruins and museums etc. which was quite a distance from the town site and had little shade -  later we heard it was 45C.!! No wonder we felt awful.  We stayed in the town by a little restaurant that had tables outside under big trees.  (We would have gone inside if there had not been people smoking in there!!)  This restaurant was situated on a steep incline (the whole town was perched on the side of a mountain - everyone had a view!!) and to get to the tables from the restaurant you had to cross and small road/lane and the tables were atop a steep walled terrace, which wall dropped down to an adjoining road!!  It was fortunate that it was "mesi meria" time (Greek for siesta) as there was not much traffic and therefore not too noisy (however, there were crickets making a lot of noise) and there was a bit of a breeze, but the breeze was hot - still, it helped a little.  So we waited there until the others finished their trekking around the sites.  When they got back, we moved over to where the cars were and unloaded the food and water (we froze bottles before we came)  and had "lunch"  -  some of us were sitting on a wall by the sidewalk and some were standing -  all under trees though!  It was really too hot to be enjoyable - only the company made it worthwhile.  After that, we headed back to Athens and we were able to get on the right road so it was much quicker -  these GPS's are hopeless as they take you off track and get you lost. It's quicker and simpler to obey the road signs  The phone didn't stop ringing when we walked in the door at the Mission Office so we had that to deal with and I also had to make squares for that special meeting tomorrow!!!

Since we stayed back at the town, I borrowed photos from Elder M. - the only problem - I don't know what they are of - just Delphi! 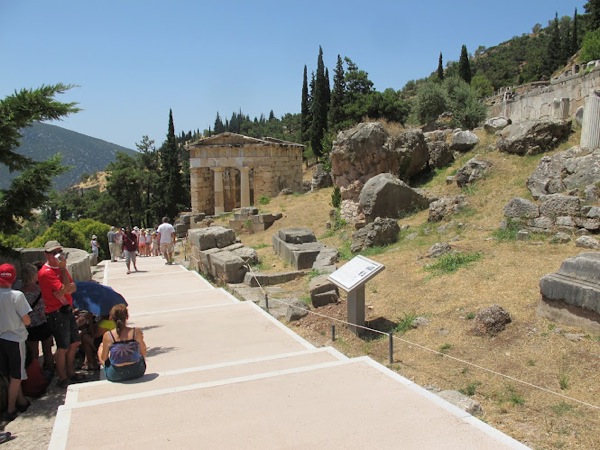