President was over here at 8am sharp to collect the missionaries to whom he had promised a trip to Corinth before they go home.  He related to us the scare that they had last night (about 3:45am) when Sis. F. heard a door bang, followed by footsteps!!  It was very unnerving, especially to Sis. F. and they didn't really get any more sleep after that.  Just after Pres. left of Corinth, Sis. F. called  -  there was someone walking around the grounds and she couldn't see who it was.  The house has high stone walls and heavy steel gates and entrance door to the grounds, with cameras, so you are supposed to feel safe there!!  Brent went over and found that the "intruder" was a man sent by the landlady to check out the security cameras etc. - so that was alright.  After a lengthy investigation it ws determined that the early morning caller was the gardener!!!  -  nobody had told Freestones that the gardener works  three homes in the area before he goes to work at his day job!  hence his early morning activity.  Problem solved - but not before a lock & key man had come to change the locks and had actually started on the door/gate to the street!!  The gardener has now been given a new key and asked not to start at their house so early.  The elders arrived back mid-afternoon with a good case of sunburn - but they'd had a good time.  A pigeon flew into one of the huge sliding glass doors in the office and he didn't move for quite a while.  When he did move, he was just walking - he made one feeble effort to fly, but didn't get anywhere, so we think he's hurt or damaged his wing.  One of the elders thought that it could heal in a couple of days and then fly off.  We'll watch it and see. Can you believe this??  Brent went out to the bird which was on the balcony and took him some bread chunks and water!!!  I think the chunks are too big for the bird  to manage though.  These "pigeons" don't look like the Canadian ones - they might be doves!  They're small and more delicate looking than ours.  Tonight, all the couples went to dinner at "Inez's Mexican Restaurant."   Inez (she's from Peru) is a very good friend of Elder & Sis. Mower (he speaks Spanish) and she has a baptismal date for Sept. 22nd.  She is so sweet and she wanted to do a farewell dinner for the Mowers and his "guests" (we 4 couples).  Inez does not normally open on Monday nights, so this was a special dinner just for us!  First, she brought us tamales, then a large platter of sliced potatoes, covered with a mustard sauce and a half of boiled egg on top  -  it was really good. Then came sweet potatoes, then a shrimp and fish dish in lemon sauce  with mushrooms.  Savory Rice came next and the finale was a huge dish of prawns and veges in a sauce (that was so good).  Dessert was a kind of cherry cheesecake - it was a little bit different than our cheesecake, but very nice anyway.  Inez wouldn't let Elder M. pay for the dinner, so we just left money under our plates when we left and hoped we could get a ways down the street before they discovered it. 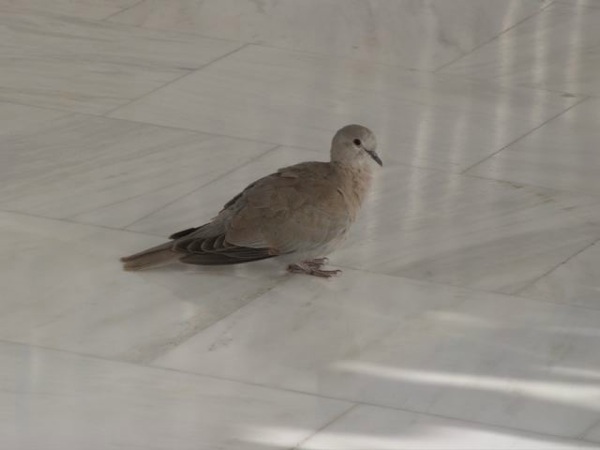