A busy day with meetings and preparing for the couples' meeting tonight.  Besides getting his "real" work done, Brent had lots left to do on the script for the "Kangaroo Court" tonight.  We didn't have a big lunch today as only the Mission Presidency and later, the Assts. met with President.  We did however, order in pizza, but I didn't have to do any extras.  President F. brought up on the internet, Elder Holland's CES talk which was very good - but, of special interest in his talk was a story about Pres. Freestone's son, Isaac, which was kind of special.  By 5pm, we had made a huge Greek salad and Brent had finished the script and we went over to the mission home.  Supper there included Chicken in asian sauce and a big platter of egg-rolls (prepared by the Philippino housekeeper - so yummy), roast seasoned potato wedges - our Greek salad - grapes, melon slices, kiwis etc.  Dessert wad Sis. Elks' cream puffs - fabulous!  The "Kangaroo Court" as hilarious.  Sticking to the script became optional as everyone began adding their little bit to the dialogue - it would have made a good "Fawlty Towers" episode!  The Mowers were pronounced guilty of doing all the good deeds they were accused of - but then they were let off for good behavior.  We finished up by each telling them how grateful we are for all that we have learned from them and how much we love them.  It was a great evening.          Our gardener prune the trees and bushes etc. today.  In Greece, when they prune, it is a drastic  action.  Example below.  However, we have seen what happens to these poor naked trees etc. when Spring comes - after a month even, you would never known that they had received such harsh treatment  in the Fall - everything grows so well here, they just about double their size! 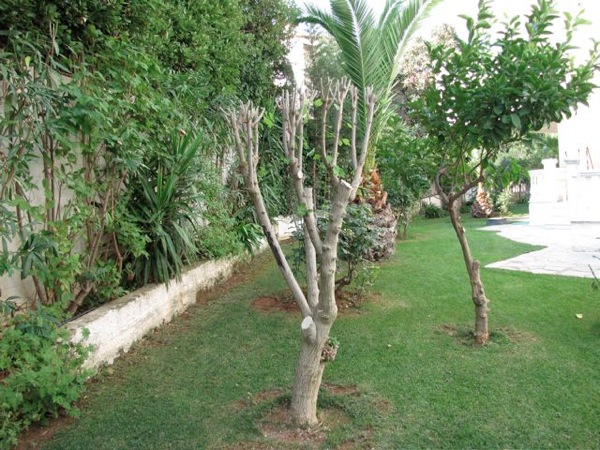 Below, is actually an olive tree.  It used to look like those that you see in the background! 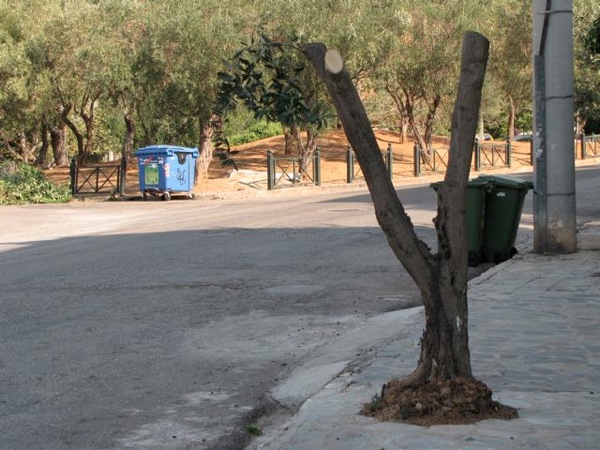