The pigeon is still on the balcony.  Brent watched him trying to break up the bread chunks and got the bright idea that some of our oatmeal might be better for him  -  so he put out about a third of a cup and he tried a bit and went back to the bread, but then came back to the oatmeal and went nuts!  He cleaned up the whole lot!  We hope that whatever is wrong will heal and he'll just fly off!  The couples came for the meetings and I got help from the sisters while their husbands were in one of the meetings.  That's a pretty good deal - helps me a lot!   Our lunch today was Curried Chicken Salad, plus penne in a bacon/garlic/3-cheese sauce, plus French bread, and dessert was Choc. Sheet cake, iced and decorated with what looked like Cadbury Choc. Fingers and served with ice-cream  -  also watermelon!  It went over well!  We had been expecting a color laser printer a couple of weeks ago, but they had sent black & white.  Today the color one came - Yea!

Here are pictures of "the pigeon"  trying to eat the bread and the other where he's in the process of shoveling in the oatmeal!! 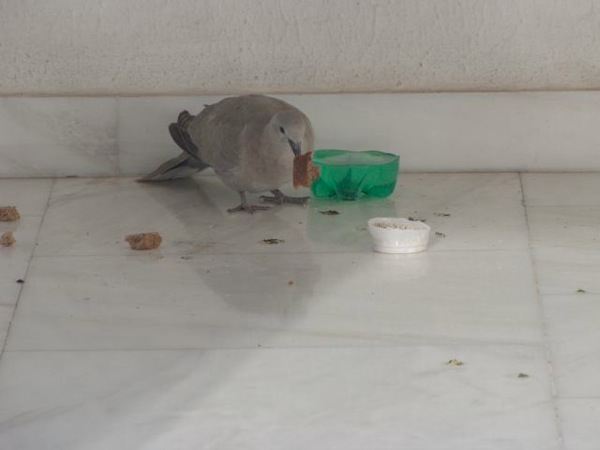 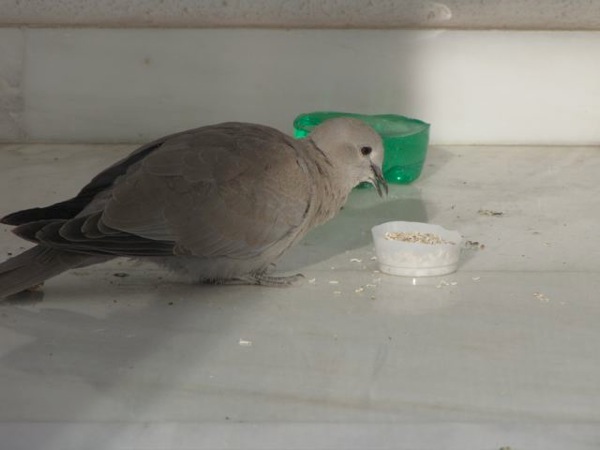