We woke up to a huge thunder/lightning and rain storm.  Brent went to get the mail in a hurry so he could get back in time to drive Pres. & Sis. F. to the airport.  He came in the office and sat down and reached for the waste basket, took his shoe off and the water just poured out of it – and he was holding his socked foot over the basket and it was dripping too!!  Where he had to get out of the car down at the post office, it was running a torrent about a foot deep and there was no way to get to the post office without having to wade through it!  After getting into dry socks and shoes, we left for the airport with Pres.& Sis. F.  Not too far from here, there has been excavation and pipe laying in one of the narrow streets.  When we got to that spot, we found that it was blocked and we began following a long line of cars, going round these tiny little side “roads” (nearly all of them one way) all headed in the opposite direction of our destination and Pres. was beginning to worry that he wouldn’t make it to the airport in time to check his baggage.  Finally, one of the car up ahead just turned onto one of the one-way streets (the wrong way) and before long we were on the main road headed in the right directions.  However, we were in a major traffic jam just inching along!!  When we finally got down to the circle which connects you to the “freeway” call Attiki Odos, we thought we would be OK, but it also was only doing 20 to 30 km – not the usual 100 to 140 km.!!  The rain was coming down in torrents and we began to get small hail!  Enough, that there was a build up of white at the edges of the road.  What really made us laugh was that at each underpass, there was a little group of cars taking shelter!!!  It wasn’t even pea-size hail!!  As we drew nearer the airport the rain eased and the road was better and the traffic move more quickly – as a result, President JUST made it before they closed the baggage check-in.  Brent & I decided to park in the Ikea parking lot (which is right by the airport close to a run-way) until we could see that the storm was abating.  As we looked north, it was black and buildings in the distance would be visible one minute and then disappear from view.  The lightning was spectacular from our vantage point.  The storm just didn’t seem to be lessening or moving and after 15 minutes or so, it began raining where we were, so we decided to go.  We found that it was an easier drive until we got to the circle and immediately, as we exited, we found ourselves inching along once again.  About halfway up Kifissias to where we turn off, there is some kind of an enclosed natural area the wire fence of which sits a little higher than the road and natural area all slopes down toward the road.  As we reached that area it became apparent why the traffic was so slow.  Muddy water was cascading through the fence and on to the road – it was probably about 18 in. deep.  One car was dead in the middle of it and only one out of three lanes of traffic was getting through.  After that, we had no problem.  Closer to home, we passed a car at the side of a road which was parked – but, a manhole cover was stuck under the rear of the car with the force of the water pouring out of the manhole – it was like a fountain bubbling up and over!  When we got home, Elks phoned – they were sitting in the dark!   Earlier, they had tried to go somewhere in their car, but as soon as they got out onto their road they found that they weren’t going anywhere!  They live on a slope of a hill and the streets around there are also mostly one-way – so if you pull out onto your road and drive even a little bit, you have to go around “the block” so to speak to get back in. The traffic was jammed everywhere there too and it took them 45 minutes to get back.  They have an electric gate opener and another for the common garage.  They got in OK and no sooner walked in to their apartment and they lost power.  No lights, no elevator and can’t get out of the garage or the gate.  They were sitting in one room with candles lit!!  They said it was nice to have a forced rest!   All the streets around them drain onto a main road below and many of the manhole covers had popped on that road, so they had to close it for some hours.  Soon after that phone call came another, from our landlady in South Africa.  She had been watching the 12 noon news and they were reporting on this storm in Johannesburg, so she phoned to see if we were flooded again or not (we flooded about this time last year in a similar storm).  The Assts. were away on an exchange today and won’t be back until late tomorrow.   I worked on more updating stuff, distributing the tag order, and sent out orders.

This is where Brent got his shoes full of water! 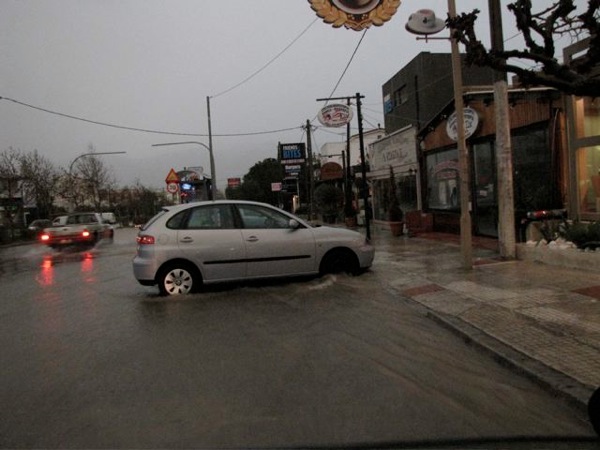