President came to pick up the Assts. at 8:15 am to take them to the airport as they were headed over to Cyprus a couple of days sooner than Pres. & Sis. F. so that they could work with the missionaries over there before they arrived.  Elks kindly came to “mind” the office while we were gone – they are the best!  It was very overcast and quite cool, but not much wind!   That was a bit of a problem, because it is “Clean Monday” and it is a tradition in Greece to fly kites on Green Monday.  Here’s a bit from Wikipedia – “Clean Monday is a public holiday in Greece and Cyprus, where it is celebrated with outdoor excursions, the consumption of shellfish and other fasting food, a special kind of azyme bread, baked only on that day, named "lagana" (Greek: λαγάνα) and the widespread custom of flying kites. Eating meat, eggs and dairy products is traditionally forbidden to Orthodox Christians throughout Lent, with fish being eaten only on major feast days, but shellfish is permitted in European denominations. This has created the tradition of eating elaborate dishes based on seafood (shellfish, molluscs, fish roe etc.).  People on Clean Monday usually take their picnic baskets and put inside fasting foods because it is the day that Lent begins”.  We met Frosts at a soccer field not too far from the office and had fun trying to get the kites up in the air, but they were the wrong design or they just needed more wind, so we gave up on that after a while and got back into our cars and headed to Sounio – about an hour and a quarter south of Athens.  That is one of my favorite places – however, it was even more overcast down there and was drizzling a bit.  Frosts had suggested that we go to a “Taberna” (tavern) that they knew of, just down the hill from the Temple of Poseidon.  Of course, there, you ate fish that day and the bread that they talked about.  There were shrimps about 6 in long (head & tail on) and some deep-sea bass and one other kind that I couldn’t pronounce or spell!! – there were chips(fries) and fried cheese and Greek salads.  They were crowded in that place, but, it was located right on the water with maybe a 5 foot strip of sand at the front, so, the kids went nuts.  In no time they were out there with shoes and sox off and searching around in the water for little fish.  One of the kids had a bit of bread and thus they found their little fish in short order – they went after that bread like a bunch of piranhas.  It was like pulling teeth trying to get them to leave, but we finally got on the road and went up to Poseidon’s Temple, took a few pictures, had a quick look around and came back down – it was drizzling and very cold.  We headed back to Athens on the coast road which was pleasant in the van out of the cold and still a lovely drive.  When we got home, we were really tired, so we just ordered in pizza for supper, got the kids to bed and the brave adults stayed up and played word games – while us wimps went to bed.

Brenda & Dave in front of the Temple of Poseidon 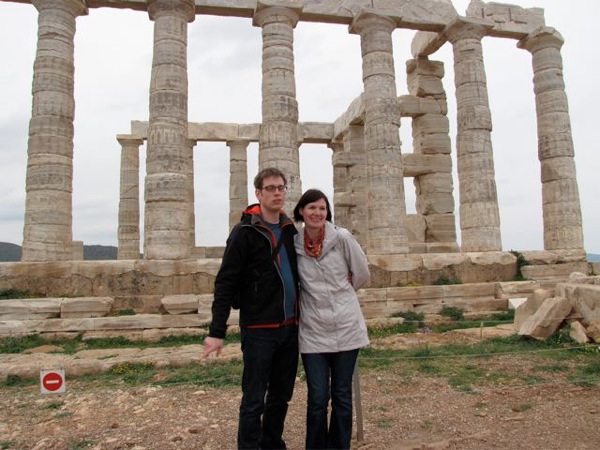