Well, it’s just about 8:30 and Brent & I are the only ones up yet – not surprising!  The weather looks iffy at the moment so we’ll have to brainstorm when everyone gets up as to where we should go today.  We decided to go to the Acropolis!  Elder Elks and Sis. Elks came to the office as they had offered to “cover” for us while the kids are here so that we can spend time with them and take them places – so Elder Elks drove us down to the centre of Athens.  That was a fabulous help. One, because we had to go in the van and there is no parking to be had in the centre for ordinary cars let alone the van! - and two, because Elder Clark hates driving in the centre.  Unfortunately, it was windy, cold and overcast when we got down there.  But that was good in one way, because there were very few people there, just the same, we did freeze ourselves - but, we did have a good look at everything and when we came down from the Parthenon I stayed at the foot of Mars Hill while the others went up there and had a quick look.  They just couldn’t go home without seeing Mars Hill, especially when they were so close.  After that, we went to introduce them to moussaka - the Greek national dish!  We went to the little place that we have been to a couple of times before and everyone was really impressed with that dish.  It was then that I discovered that I had forgotten to bring my cell phone along with me!!!  So then began the search for a pay phone.  Brent finally found one so he could call Elders Elks to come back and pick us up.  While we waited – Brenda and I went to the Plaka to see if we could get some gifts.  She did OK, but I had forgotten to get some cash from Brent!!!  Meanwhile, Dave took the kids to a park.  We got back to the appointed meeting place and Elder Elks was already there, but no sign of Dave and the kids!!  When we left them, they were on their way to the park, so we reasoned that they were there somewhere so Dad and Brenda went looking for them.  They returned minus Dave and the kids but Brent had fallen and scaped his knee and strained his left arm!!!  Poor guy!  he just can’t win.  So then, Brenda went off at a run across to the park – I was very nervous about her being off on her own, running around a park in the middle of Athens.  I don’t know how long she had been gone – it seemed  like ages – and I was beginning to panic.  It was then that we saw a little kid come out of the Acropoli chapel – then there were others – sure enough, it was Dave and the kids – one of them had to go to the bathroom!!  So then, it was back to worrying about Brenda.  Bless her heart, she finally turned up and we were waving at her from a distance that everything was OK – she was so out of breath and I, for one, was sooo relieved that everything turned out OK in the end.   So, it was back to the office and pick up the Elks and go to “Three Pigs” for supper.  They really enjoyed that place and we had a lovely time together. 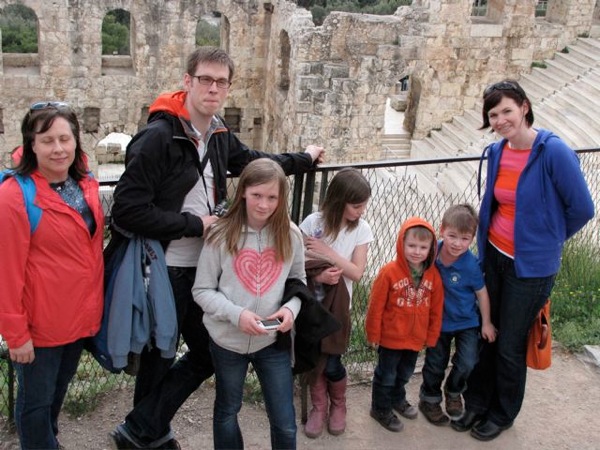 Brenda, and the kids to the left - 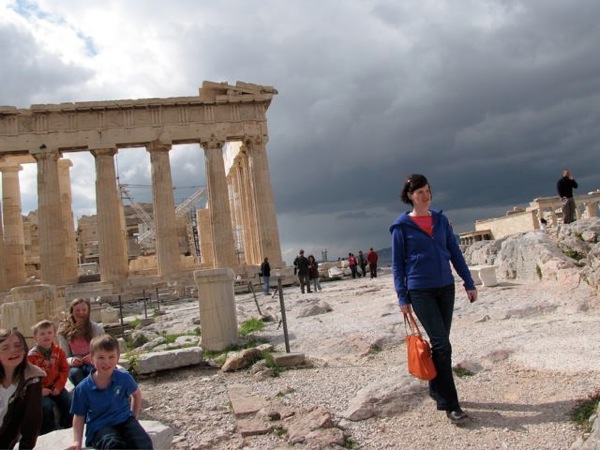